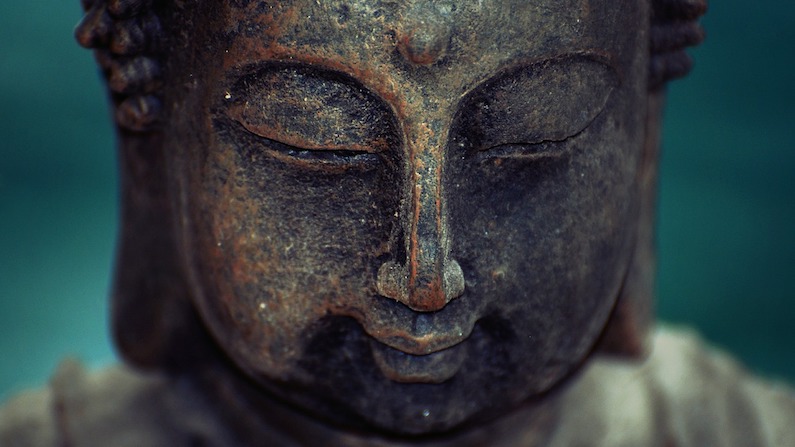 It was my younger brother’s idea to attend the Buddhist lesson. He said it was being held in the back room of a pub, a short walk from my flat, which was handy because we were running late and my bladder felt full as we headed out the door. The mantra from my childhood, “Go before you go”, rang in my ears. But to save time, I decided to hold on until we got to the pub.

My brother was wrong: the Buddhist lesson wasn’t in a pub, it was in a hall. And we entered to a chorus of shooshes as everyone took their seats, leaving us with no time for “anything else” but to sit, too. The movement squeezed my bladder, and my stomach gurgled audibly. I grimaced and clamped down on my noisy bodily functions.

The Buddhist teacher appeared, and the hall fell reverently still and quiet. He was tall, long-limbed and slender, like a distance runner. His hair was close-cropped, like, well, a Buddhist monk. And he wore John Lennon-style granny glasses, which magnified his eyes disturbingly as he cast his benevolent gaze around the room. In his full-length saffron robe, he seemed to glide rather than walk onto the stage.

Everyone stood respectfully. The teacher smiled and asked us to resume our seats (I grimaced again), before announcing we would begin with meditation, “To clear and open the body and mind.” I followed his soft, calm instructions, closed my eyes, breathed in, held my breath, and exhaled slowly. The class was my first experience with Buddhism, and I admit to feeling a little fake and faintly silly during the meditation exercises. But most of all, I couldn’t relax and “open my body” too much, as my traitorous stomach continued to gurgle!

Next, the teacher “formally” opened proceedings with Buddhist prayers. These were “optional”, which was just as well, as neither my brother nor I knew the words, and unlike a church, there were no helpful hymn or prayer sheets. However, rather than feel embarrassed, I enjoyed the chants. They were rhythmic and mystical and expressed commonsense moral and neighbourly values. And they took my thoughts off “other things”.

After prayers, the teacher introduced the topic for the evening, “Death and how to prepare for it.” I groaned (silently, I hoped) and shot my brother a sharp, sideways glance. He caught my look, and ever so slightly shook his head and raised his eyebrows in an apology. Perhaps the teacher overheard my groan because he conceded, “Death is not a cheery subject for new-comers to Buddhism.”

Despite the gloomy topic and the broken-record technique of his presentation style, going over and over the same point, and stretching out the lesson, it was a thought-provoking talk and posited three truths:

Having established each point, the teacher had us meditate on it for a further five minutes before tackling the next one. Unfortunately, it seemed I had failed to “clear and open” my mind sufficiently. My thoughts kept meandering off to a recent holiday, and plots for short stories and bladder control.

The talk and time wore on, and I grew increasingly fidgety and uncomfortable. After a final meditation on what we had learned during the evening, the Buddhist teacher looked serenely about and asked, “Are there any questions?” My hand shot up in an instant, and when the teacher fixed his magnified eyes on me, I shamed myself and my brother, who slid down on his seat beside me: “Er, yes, can you tell me where the toilets are?”

I slipped out of the hall, my brother followed swiftly, and neither of us ever returned to the Buddhist class. But I did learn lessons from that evening, and not just to always “Go before you go” (a mantra I now use with my son). The class was way back in July 1992. A quarter of a century has elapsed. With middle-aged wisdom, point three is now self-evident. And point two is highlit in my consciousness. As is point one, sadly, having lost family and friends since 1992.

My brother and I still reminisce about our first experience with Buddhism. We laugh about how unprepared we were for the class and how taken aback our younger selves were by the sober subject of death. And how I squirmed all evening!

Perhaps there’s another lesson to be learnt from that now distant class? My brother and I should be grateful for our memories and that we are still here to share them. And that we’re making new memories.

With thanks to Helena Cuerva from Pixabay for the Buddha image.