The White and Blue Niles 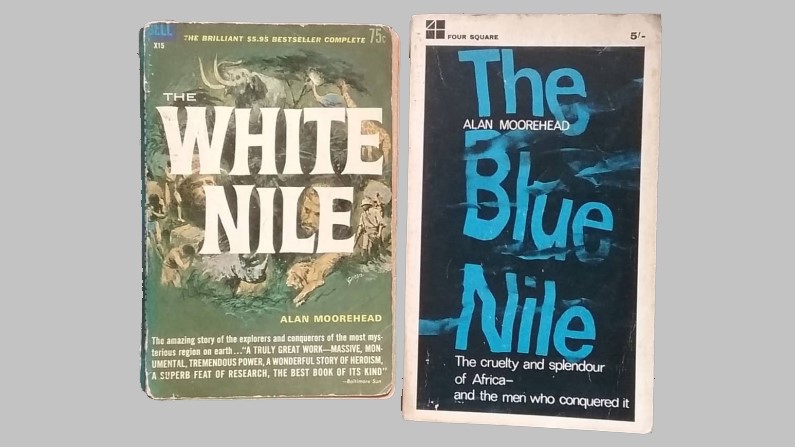 In 1987, my wife and I shouldered our backpacks and set off from Australia. The plan was to live and work overseas in England for two years, using it as a base for UK and wider world travels. And the widest of these were inspired by reading books like Alan Moorehead’s The White Nile and The Blue Nile.

With the benefit of 2020s hindsight, Moorehead’s books are products of their time. As underscored by the blurb on the covers:

“The amazing story of the explorers and conquerors of the most mysterious region on earth.” ~ The White Nile*

“The cruelty and splendour of Africa — and the men who conquered it.” ~ The Blue Nile*

Both titles were published in the early 1960s, when parts of Africa were still under colonial rule. Back then, the “Dark Continent” seemed as vast and impenetrable as Joseph Conrad’s Heart of Darkness and as teaming with wildlife as Ernest Hemingway’s Green Hills of Africa.

I bought the Nile books from a secondhand bookshop or market in Brighton where I lived in England — pencilled on the inside covers is the price of 65 pence and 1 pound respectively. Back then, I was drawn to travel writing and tales of heroic exploration because I saw myself as a traveller, not a tourist. And I wanted to write.

My favourite travel writers included Eric Newby, Paul Theroux, Bill Bryson, and Dervla Murphy. I also regularly read travel pieces in The Guardian newspaper. And through my reading and cross-references, I learned of Moorehead’s classics.

In addition to chronicling the quest for the twin sources of the Nile, the books contain first-hand accounts of other epic expeditions on the continent. And The White Nile includes one of the world’s most famous meetings:

I walked up to him, took off my hat, and said, “Dr Livingstone, I presume?”
“Yes,” he said, with a kind smile, lifting his cap slightly.
I replaced my hat on my head, and he replaced his cap, and we both grasped hands, and then I said, “I thank God, Doctor, I have been permitted to see you.”
He answered, “I feel thankful that I am here to welcome you.”

No prizes for guessing who doffed his hat to Dr Livingstone!

The Nile books also provided a historical framework for the conquest and colonisation of Africa. In a preface note to the reader in The Blue Nile, Moorehead wrote:

This book, together with The White Nile which has already been published, completes a study of the river in the nineteenth century. It is intended that the two books, though complementing one another, should be read quite separately. The White Nile dealt with the years between 1856 and 1900. Here I have stepped back half a century to 1798 and am concerned with the events on the Blue Nile and on the main stream that descends from Ethiopia through the Sudan and Egypt to the sea.

Source of the Niles

However, the keenest interest for colonial explorers and modern-day readers was in the source of the Niles. The shorter Blue Nile originates at Lake Tana in Ethiopia. The Scottish explorer James Bruce claimed to be the first European to see its source in 1770. But this is disputed, with credible reports the Spanish Jesuit Pedro Páez reached Lake Tana in 1618. (Wikipedia)

The longer White Nile proved far more challenging to explore. It originates at Lake Victoria in Uganda. And the first European to sight its source, the British explorer John Hanning Speke, didn’t do so until 1858. (Speke also named the vast lake in honour of Queen Victoria.) But like Bruce and the Blue Nile, this claim was disputed, principally by Speke’s partner in the expedition, Richard Francis Burton.

And fittingly, it was Henry Morton Stanley, who famously “presumed” he’d met Livingstone, who proved Speke’s claim by circumnavigating Lake Victoria in 1876. (Wikipedia)

Instead of staying overseas for two years as planned, my wife and I lived in England from 1987 to 1995. And we returned to Australia via a nine-month overland adventure, inspired by travel writers and Michael Palin’s Pole to Pole TV series. First, we headed east to Finland and then turned and travelled south until we reached Zimbabwe by train, boat, bus, truck and even bicycle.

In Africa, we followed the Nile in Egypt from Cairo to Aswan. We crisscrossed the Blue Nile in Ethiopia and visited its source at Lake Tana. And we sailed on Lake Victoria in Uganda.

As we stood staring in awe at the rivers and their sources, I thought of The White Nile and The Blue Nile. Yes, Alan Moorehead’s books were products of their time. But when I read them, they inspired me to travel.

In turn, the Nile books led me to see the world differently from how Moorehead depicted it in the 1960s. And from how I thought of it as a backpacking “traveller” in the 1980s and 1990s.

N.B. You might like to read another blog post about the inspiration provided by Michael Palin’s Pole to Pole for my 1995-96 overland adventure, with a map of the north-south route.