Both Sides of the Story (eBook) 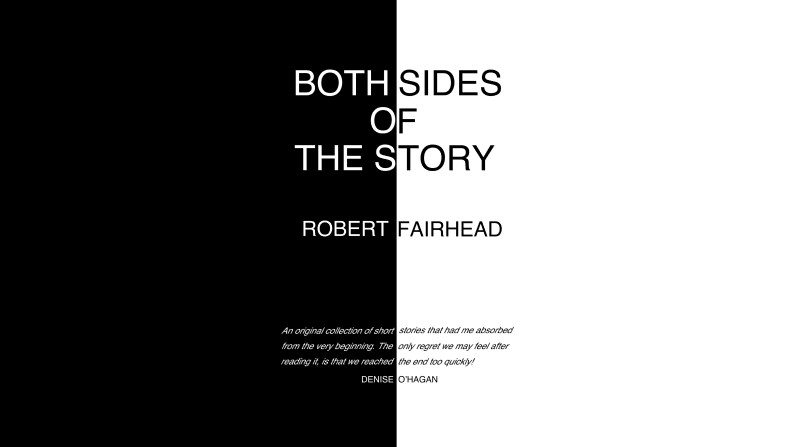 Phil Collins released Both Sides of the Story in October 1993. It was a catchy song, but I remember it more for the music video. Scenes of homelessness, domestic violence, military patrols on streets and a ghetto kid mugging a white man, juxtaposed with Collins crooning, ‘We need to hear both sides of the story.’

In February 1994, I started working on a short story for the Ian St James Awards. It was my third submission to the then annual awards, at the time, the UK’s biggest fiction prize for unpublished writers. The deadline for my 5,000-10,000 word story was the end of the shortest month of the year, 28th February.

Yes, I know, I should have started sooner, but I had the good fortune of my wife going away on work trips for two weeks in February. And, we were childless back then. I had no responsibilities outside of my nine-five job, and I spent every other waking hour writing.

The idea for the story came to me while working out in a gym. The news at the time was full of items about people for whom the public (including me) had little sympathy. I watched Collins’ Both Sides music video on MTV in the gym, and it set me thinking: Could I show both sides of the news in a short story?

A busy week of writing

‘Set up the computer downstairs to write my Ian St James story, but only managed to jot down an outline. Had an early night and sought inspiration in a short story about a Jewish matchmaker. Great characterisation.’

Obviously, I was going to have to work harder and with more focus on my writing. And I did over the next week while juggling my nine-to-five job, as I noted in my diary (Monday 14th to Friday 18th February):

‘Home from work as soon as possible to spend late nights banging words into my computer. Kept up good pace, writing a scene a night, each averaging 1,000 words. Amazed how some scenes developed. They seemed to create their own twists and turns, guiding my fingers over the keyboard. And somehow the endings fell into place, generally when I needed them, as I neared my midnight time limit. Felt great to be writing again. And to be alone, so I could devote myself totally to the task.’

By the weekend I was exhausted. However, I still had to write the final piece, to pull together and make sense of the four vignettes I had written. And then I had to print and edit the first of what proved to be several drafts.

Another busy week of edits and revisions

My wife returned home from her first week of work travels and left the next day for another week away. It sounds mean, but I was grateful for the quick turnaround. I needed another week on my own for edits and revisions, as I wrote in my diary (Monday 21st to Friday 25th February):

‘More late nights spent working on the story, including a ridiculous 2 AM on Thursday. Editing not as much fun as banging in words, though of course, necessary. Focused on weekend deadline and thought that all the time I’d spent on the story would be wasted if I didn’t polish and post it by midday Sunday.’

These were the glory days of the British Royal Mail when post collected on a Sunday would be delivered the next day. In my case, that was the deadline date, Monday 28th February. Which meant I still had the whole of Saturday and some of Sunday to finish the short story. But it proved a tough task:

‘Struggling with ending of story. Pivotal last scene is in danger of sounding trite. Printed off the penultimate draft for proofreading and feedback [from my wife]. Nervous wait for comments. And another late night making last-minute changes.’

The next day I was even more on edge, but thankfully my trusty dot matrix printer did not let me down:

‘Noon deadline loomed as the printer chugged out letter quality copy of Both Sides of the Story. Posted it with less than thirty minutes to spare. Celebrated with a pint and pub lunch.’

On Wednesday 2nd March, I received confirmation in the post from the Ian St James Awards that my short story had arrived. (Bless the Royal Mail!) Now I just had to wait for the first round judge’s critique. When it arrived, his feedback was mixed:

‘A well written, ambitious and impressive piece of writing. The author’s flair for language is considerable. But I think, plot-wise, this entertaining story exceeds both the limits and rules of the genre. This, I feel, would be better suited for a novel and as a short story, it isn’t quite self-contained enough.’

My ‘well written, ambitious and impressive piece of writing’ had failed to progress past the first round of judging. And so I filed it away with my other failed writing from that period.

Shared on Tall And True

In November 2019, I re-read the yellowed printout of the short story and still felt proud of it. The protagonists in the four vignettes remained unsympathetic, as they would have been portrayed on the news in 1994. And the fifth piece linked and resolved the story as I had planned, as well as paying homage to Collins’ song.

So, twenty-five-plus years after I wrote it, I decided to share and showcase Both Sides of the Story on the writers’ website, Tall And True, as a five-part series. Westminster, Bosnia, A Council Flat, and The Gym are the vignettes. And Bad News is the fifth and final part.

Interestingly, the vignettes required fewer edits in the transcription. Whereas, the fifth piece, Bad News, with which I’d struggled twenty-five years ago, once again proved the most difficult to transcribe. And in the end, it required more edits and structural changes than the other four parts combined!

Having shared Both Sides of the Story as a series, I decided to publish it as an eBook and make it available online. One of the joys of publishing the final piece, Bad News, on Tall And True, was reading all five parts of the short story in sequence. I hope the reader enjoys a similar experience with the eBook version.

I should also stress my intention in writing this short story in 1994 was not to be an apologist for my characters or their actions. Then, as now, my goal was to follow Collins’ lead and try to imagine both sides of the story.

In October 2019, Phil Collins completed the last leg of a three-year, worldwide Not Dead Yet Tour, twenty-five years after releasing his Both Sides album and song. I regret not going to his Sydney concert, as a way of saying thanks for the inspiration to write my short story.