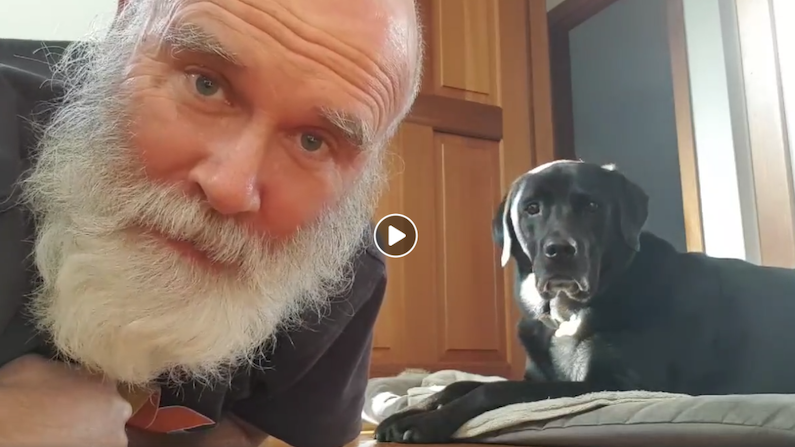 In October 2017, I published a blog post about my experience of doing the 22 Pushup Challenge for PTSD in 2016. I mentioned how I had struggled to do 22 pushups at the start. Four years on, when my younger brother nominated me for the 25 Pushup Challenge, I felt even more apprehensive!

Like the 2016 challenge, my goal was to do 25 pushups for 25 days to raise awareness of PTSD, anxiety and depression. I posted a video of each day’s pushups to Facebook and, to help spread the message, I was to nominate a friend to take up the challenge.

However, like the 22 Pushup Challenge, I skipped the nomination part. Instead, as I did in 2016, I posted links to resources — websites, articles and quotes — with my daily videos.

Given how I strained with my Day 1 pushups (video on Facebook), Day 25’s website link proved to be one of the most helpful for me, albeit a bit late! And Day 23’s “highs and lows” quote on parenting teenagers provided some comfort after my son split his lips and knocked out a tooth the previous day doing a parkour jump.

It occurred to me that as with my 22 Pushup Challenge links, these resources may be helpful for readers and others — please feel free to share them and this blog post.

Day 1 – An extract from the blog post I wrote on my 22 Pushup Challenge for PTSD, with links and resources:

“The 22 Pushup Challenge was also known as #22KILL on social media, taking its name from the sombre fact that an average of 22 veterans a day commit suicide in America. In Australia, Michael Smith News quotes a Walking Wounded report (January 2016) that 239 returned Australian soldiers took their lives between 1999 and 2016.”

Day 2 – Quotes about depression and what it feels like from Psycom.net, a US site that focuses exclusively on mental health:

Day 3 – “Anxiety, Depression and Suicide — Who does it affect?” from Beyond Blue (Australia):

“Anxiety, depression and suicide can affect any of us at any time. But at different points in our lives, we can be at greater risk. When we’re going through big changes such as becoming an adult, retiring, starting a family, or losing someone we love, for example.”

Day 4 – “How Dogs Can Help with Depression” from the National Alliance on Mental Illness (America):

“Did you know that dogs can play an integral part in your emotional well-being? Dogs can contribute to your happiness. Studies show that dogs reduce stress, anxiety and depression, ease loneliness, encourage exercise and improve your all-around health.”

“The Australian Men’s Sheds Association recognises a Men’s Shed as any community-based, non-profit, non-commercial organisation, accessible to all men. A Men’s Shed’s primary activity is the provision of a safe, friendly and healing environment. Men can work on meaningful projects at their own pace, in their own time and in the company of other men. A major objective is to advance the well-being and health of their male members and to encourage social inclusion.”

“The Coolum Women’s shed is a space for women to connect through shared interests. We are a non-profit organisation run by volunteers. Our members organise a wide variety of activities including arts, crafts, health and wellness.”

Day 7 – A quote about mental health from Headspace Australia:

“More than 75 per cent of mental health issues develop before a person turns 25.”

Day 8 – The stepson of an Australian Vietnam veteran gives an insight into what it’s like to live with war-induced PTSD on Aljazeera:

“People with high-functioning PTSD turn up to work, and they do their thing, and you would never know that they are suffering from PTSD. Until something triggers them in your presence and you realise that there is something that’s not right.”

“People find it hard to recognise that anxiety is a serious condition, yet it feels quite crippling inside. It needs treatment like any other condition.”

“There are a lot of guys there that want to hold it in and push away those people that are important to them, but I think that’s an old-school way of thinking.”

Day 11 – Personal blogs and stories on depression from Time to Change (UK):

Day 12 – An Australian book I saw recommended on the ABC Book Club page on Facebook, The War Artist by Simon Cleary:

“Here, at last, is a novel that tackles the legacy of the Afghanistan War and the crippling psychological damage of PTSD.” ~ Rodney Hall

Day 13 – Another quote from Headspace Australia on anxiety:

“Anxiety is more than feeling stressed or worried. It can be tough to cope, but with the right support, things can get better.”

Day 14 – Inspired by my younger brother, who did his 25 pushups at the pool yesterday before doing his first laps since the COVID lockdown, a link on the mental health benefits of swimming from the Just Swim website:

“Swimming has significantly reduced the symptoms of anxiety or depression for 1.4 million adults in Britain. Almost half a million British adults with mental health problems have stated the number of visits to a medical professional regarding their mental health has reduced as a result of swimming.”

Day 15 – Sunset pushups in Centennial Park had me investigating the link between depression and nighttime rumination on the Very Well Mind website:

“People, particularly people with depression, often go through a process called rumination. They repeatedly mull over past events and issues that concern them, trying to make sense of them or imagine them having a different outcome. Not too surprisingly, you tend to be more prone to rumination when you’re alone and free from distractions, which tends to be at night for many of us.”

Day 16 – Returned to Centennial Park the next morning for my pushups. So I posted an article on the mental health benefits of parks from The New Daily.

Day 17 – Listened to a podcast on books yesterday while walking my dog. The hosts reviewed Phosphoresce by Julia Baird. Chapter 16 is titled The Lassie Effect and explores the health benefits of owning a dog:

“As with social connection, there is evidence that dogs not only improve our health in the present but can protect it in the future as well. A Swedish study found dogs lowered mortality and risk of cardiovascular disease. Australian researchers also found that those who owned pets had a significantly lower risk of becoming ill, especially men. This is often called The Lassie Effect.”

Day 18 – This popped up in my Facebook timeline memories, a glimpse inside PTSD from a 2017 post by Assistance Dogs Australia:

“Forced to go to the supermarket, on a day when I was already struggling. By the time I hit the 3rd aisle, the anxiety attack starts because some kid’s screaming at the other end of the supermarket. To me, it sounds like she’s in my arms and dying though I’m sure most people wouldn’t even notice her from so many aisles away.

Jimmy does his job and ‘counters’ on the trolley and starts licking my face. I kneel down with him in the aisle and try and get my breathing back from the blowing n puffing I was doing. A couple of minutes later, I stand up, breathing a heap better but wobbly kneed. Jimmy decides my face needs more licks cause I’m still wound up like a top. I rip the phone out to distract myself and get a pic of Jim doing his thing. I look calm, outwardly, but I’m emotionally and physically trashed.”

Aside: About my dog

My dog, Jet, featured in all my pushups videos. Sometimes he tried to be helpful and other times not! Thankfully, he mostly flopped on his mat in the background and waited for me to finish the pushups and give him a treat. 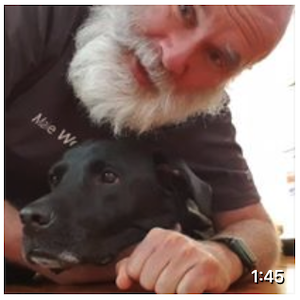 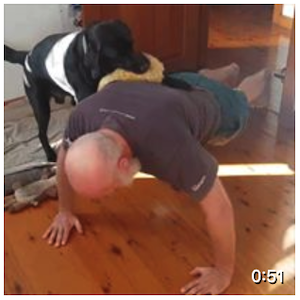 “What is the meaning of life? It’s a big question. [And] it’s a daunting question. But thankfully, today I have the answer.”

“Suicide is still the leading cause of death of young people, and fewer than 30 per cent of young people experiencing distress receive the help they need. To achieve our vision of helping all young people be happy and well, ReachOut will continue to look for ways to reach, connect with and engage young Australians.”

Day 21 – Depression poems to get you through tough times (and understand those struggling with it!) from BookRiot:

“I struggle with depression, and as a writer and (former) poet, I find myself drawn to poetry to find solace, comfort and solidarity, and to better understand my experiences. And the experiences of those who deal with depression in ways that don’t mirror mine at all. Depression poems offer up such a range of experiences. They put the period at the end of the statement that no single experience can get it right or accurately depict what mental illness looks or feels like.”

Day 22 – Suggestions on how to help when you’re worried about someone’s mental health from the Black Dog Institute (Australia):

“It can be hard to know how to support someone who has a mental health issue or whose well-being you’re concerned about. [However,] friends, family, and colleagues are a crucial and necessary support mechanism for someone going through a difficult time.”

Day 23 – A spot of self-indulgence after the “lows” of yesterday, when my son had an accident doing parkour, 26 Best Quotes About Parenting Teenagers from Raising Teens Today. Warning, it’s an American website, so some of the quotes are a bit “mom and pop and apple pie-ish”:

“If you’re the parent of a teenager, then you know. Raising teenagers is exciting and exhausting, fun and frustrating, amazing and agonising – let’s just say it has its fair share of highs and lows!”

Day 24 – Background into PTSD and resources to help parents of kids suffering the disorder from the KidsHealth website (America):

“Be sure to also take care of yourself. Helping your child or teen cope with PTSD can be very challenging and may require a lot of patience and support. Time does heal, and getting good support for your family can help everyone move forward.”

Day 25 – Tips on preparing for and doing pushups from the Pushup Challenge website:

“Just like any big fitness event, it’s a good idea to ease your way into it. If you haven’t done pushups for a while, build up into it. Perhaps start with just a few pushups. This will give your muscles time to regain strength. Be sure to spread your pushups out over the day to reduce the burden. Ease your way into larger sets only when you feel comfortable doing so.”

However, as I commented in the video, I got a hell of a lot closer to 50 pushups than I would have on Day 1. And with the extra pushups, I got to post a few more links to resources for PTSD, anxiety and depression than I did in 2016.

N.B. Here’s another link to my earlier blog post on the 22 Pushup Challenge for PTSD.