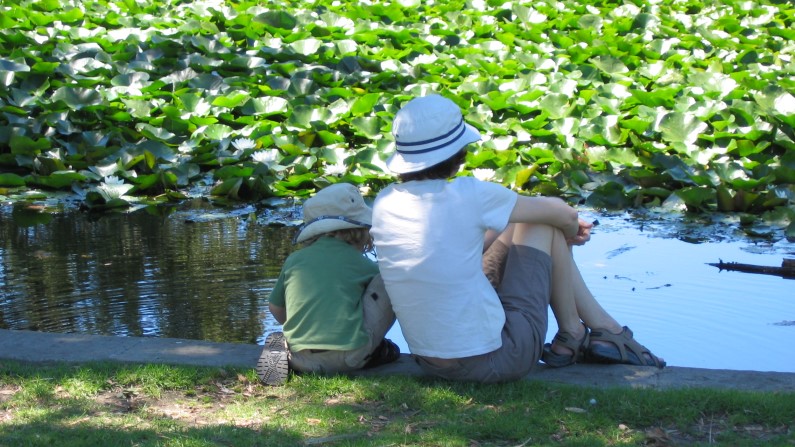 The candid photo of my son and wife beside a pond in Sydney’s Centennial Park was taken by a friend in March 2005. I had met Marie, and her husband, Drew, a retired couple, through a mutual park and dog-lover friend. And afterwards, I’d bump into Marie and Drew in the park, and she’d take a photo, one of her hobbies, and share it with me. My son was two-and-a-half and had long blonde hair. And Marie dubbed him Christopher Robin.

As the years passed and my son grew older, Marie and I saw less of each other in the park. But in 2012, we became friends on Facebook, sharing thoughts, photos and articles about the park, dogs, books and politics. Despite our generational age difference, Marie and I had similar outlooks. And I enjoyed the insight and wisdom of her posts and comments and was proud to say Marie was my oldest Facebook friend.

In recent years, Marie posted on Facebook about her early life and adventures in England and Australia. She shared stories of her father, who fought as a sixteen-year-old in the WWI trenches at Ypres and swapped cigarettes with German soldiers during an Easter ceasefire. And her mother, who worked as a machinist in a parachute factory during WWII and made Marie a green and faun “camouflage” dress from offcuts. And of her childhood in a village near London and sheltering in a chimney during the Blitz.

From her posts, I learned Marie had emigrated to Australia in the 1950s, where she married Drew, a fellow English migrant. They raised a family, first in Kings Cross and then Paddington. And it was here that Marie’s long connection with Centennial Park began on walks with her dogs. Marie loved cats and dogs, but I suspect she had a particular soft spot for the latter companion animals. And in a 2021 post, she listed the names of all her dogs:

Chappy Wyatt, who played in the streets of my childhood with Snooky Saunders and Trusty Newell. Wake, a Great Dane. Honey, my first boxer, who lived with us up the Cross, would wander the streets and come back from a visit to the local Hungarian restaurant with sour cream over her face. Bindi, Rosie, Bonnie and Keyboy, my next boxers and all lovely and different. Caesar, a handsome corgi Alsatian-cross, who was going to be dumped on the street when his family moved. And Lucy, a silky terrier.

In addition to the posts, Marie shared photos of her parents, grandparents, and aunts and uncles. And of her and Drew, their children and grandchildren, and their dogs and cats. These were obviously special to Marie, but so were ones she took of urban wildlife, like possums in her Paddington backyard. And, of course, photos of Centennial Park.

Marie displayed a strong social conscience in her Facebook posts. Given her passions, she commented on environmental and animal welfare issues. But she also supported women’s rights, Indigenous Australians and same-sex marriage.

And Marie called out racism and discrimination in all its guises, offering a personal reflection when protests took place in a regional town in 2015 over the Muslim community’s plans to build a Mosque:

When we lived at Kings Cross, I was walking down an empty street early one morning with a baby on my hip to get milk. A very tall man crossed the road, stood in front of me and said, “Hitler knew what to do with you Jewish b—s he threw you into ovens.” I was about to say, “I am not Jewish”, but I thought it sounded terrible. And I remembered my grandfather was a German Jew. In any case, the man walked off, and I never saw him again. But it was good to know how it feels to be discriminated against because I have olive skin and dark hair (or did) and take after my Jewish grandfather.

My son’s birthday is in early June. And in 2015, to wish him a happy thirteenth birthday, Marie shared the photo she’d taken of young “Christopher Robin” beside the pond in 2005, commenting:

One of my favourite photographs, and I have taken quite a few.

Marie had tagged me in the post, and every year since, it’s popped up in my timeline memories around my son’s birthday. And I’ve re-shared it, thanking Marie each time for the treasured memory.

A few days after my son’s birthday this year, there was a knock at the front door. Marie’s daughter had dropped by to let me know her mother had passed away in May after a short illness. She gave me a card to thank me for my friendship with Marie over the years. And a book she thought her mother would like me to have, “Started Early, Took My Dog” by Kate Atkinson.

I had only known Marie through our mutual love of Centennial Park and of dogs and books and our communication via Facebook. But I still shed tears at the news of her passing. And at the kindness shown by her daughter in letting me know personally.

In writing this blog post, I’ve had the joy of browsing back through Marie’s Facebook posts. And I found one she shared with me in 2019:

You are very interesting, Robert. Thanks for befriending me all those years ago.

And thank you, Marie, for being my friend from Centennial Park and on Facebook. You were very interesting, too.

N.B. Here’s a link to another blog post I wrote about someone I met through dog walking in a park, Queens Park Dog Walkers.

The Spirit of Xmas

Writing From My Travel Journal