The Gorilla Hunters by RM Ballantyne 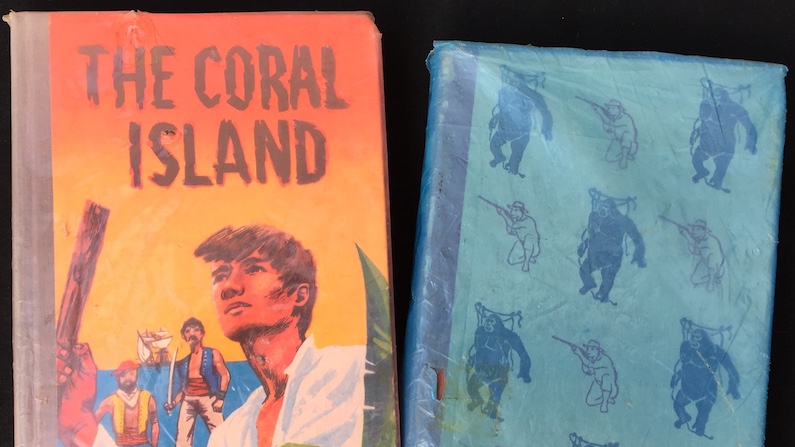 There were old tea chests in a spare room at my grandparents’ house, from which my younger brother and I unearthed 78 RPM records that played scratchy tunes on a wind-up gramophone until we overwound it and broke the spring.

And we found 1940s Film Fun Annuals and Biggles books that had belonged to my father and uncle as boys. But the greatest treasure for this boy was a mint copy of The Gorilla Hunters by R.M. Ballantyne.

Inside the cover was the inscription, “To Brian from Nan, Xmas 1949”. My great-grandmother had given the book to my father, Brian when he was a similar age as I was back then. It must have read like a boys’ own adventure to my younger father, though the book’s opening sentences make it sound stilted and dated nowadays:

I was seated in an arm-chair in my private study in a small town on the west coast of England. It was a splendid afternoon, and it was exactly five o’clock. I was ruminating, as I frequently do, on the pleasant memories of bygone days, when a tap at the door aroused me.

(My Grammarly Editor also complains about “arm-chair”, warning “the word may seem dated to modern readers”, and recommending “armchair”.)

As for the subject matter, when published in 1861 and even in 1949 when my eleven-year-old father read The Gorilla Hunters, travelling to Africa to shoot gorillas and other game would have been considered a brave and decent endeavour. The idea is an anathema to me now. But as a ten-year-old boy, I didn’t know better. I loved reading my father’s old book, in the same way as I loved Tarzan movies and Phantom comics, all set in “Deepest Darkest Africa”.

Around the same time that I found my father’s book, I spotted another of R.M. Ballantyne’s titles in a “cheap classics” bin at a local bookshop. Published before The Gorilla Hunters in 1858, The Coral Island proved to be a rollicking sea tale, with shipwrecks and pirates:

It was a wild, black night of howling storm, the night in which I was born on the foaming bosom of the broad Atlantic Ocean. My father was a sea-captain; my grandfather was a sea-captain; my great-grandfather had been a marine. Nobody could tell positively what occupation his father had followed; by my dear mother used to assert that he had been a midshipman, whose grandfather, on the mother’s side, had been an admiral in the royal navy.

I recognised the teenage boys’ names in the book, Jack, Ralph and Peterkin, from The Gorilla Hunters. These were the days before home computers, the internet and Wikipedia, so like another of my favourite childhood literary figures, Sherlock Holmes, I deduced [spoiler alert] the shipwrecked boys were rescued. And they grew up to be the men who sailed to Africa to shoot game. (Good luck for the boys, bad luck for the gorillas!)

Although I was only a boy (who broke my grandparents’ gramophone player), I realised these were a unique pair of books and needed protecting. And so I covered them in plastic. For some reason, I chose pink for The Coral Island and blue for The Gorilla Hunters. Contrasting colours aside, the covering worked, and my 45-year-old book and my father’s almost 70-year-old treasure are still in good, if not mint, condition.

The writing and themes of R.M. Ballantyne’s classics are outdated — I’ll never reread them. But perhaps I should put them in a packing box in a spare room with my old LPs, for my grandchildren to find one day?

N.B. You might also be interested in this blog post, My First Book (September 2017) — my treasured Sooty Annual is stored safely in a packing box, along with the 1940s Film Fun Annuals!