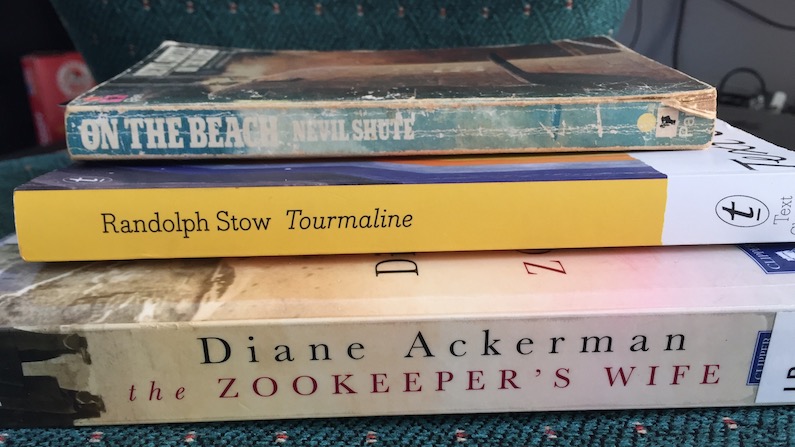 The Writer’s Circle recently posed a question for book lovers on Facebook: What book are you currently reading?

In my case, the answer is not singular but plural. I’m currently reading three books — along with a few more on my bedside table I’ll probably need to take with me to my grave to finish!

On the Beach by Nevil Shute

With the bleak news on North Korea and boys-own brinksmanship of Donald Trump and Kim Jong-un, I thought I’d dust off and re-read my old second-hand bookshop copy of On the Beach (Amazon) to prepare for the worst, should common sense and humanity not prevail!

Published in 1957, the book is set in a post-apocalyptic world where the radioactive cloud from a catastrophic northern hemisphere nuclear war is spreading gradually and inexorably southwards towards the beaches of Australia and beyond. I recall the story being powerful and unrelenting. When I first read it, I kept waiting for the winds to change or for scientists to save the world.

To my mind, On the Beach remains sadly relevant and contains a salutary message for today’s world leaders — if only they can drag themselves away from sabre-rattling and social media to read the book!

A couple of years back, I read and reviewed Randolph Stow’s To the Islands and Visitants (Tall And True reviews) for the NSW Writers’ Centre. It was the first time I’d read Stow, whom fellow West Australian writer, Tim Winton, described as his “light” from “where I took my bearings”, and when I finished the books, they left me wondering WHY it had taken me so long to discover him!

Tourmaline (Amazon) was Stow’s fourth novel, published in 1962, after his Miles Franklin Award-winning To the Islands. It’s set in a fictional outback West Australian town that’s seen better days and is dying from the lack of water and industry. A badly sunburnt and half-dead water diviner arrives in the town, and the townsfolk nurse him back to health, as much as in the hope he’ll find water and in turn nurse the town’s fortunes back to health.

But the water diviner appears to have a “higher calling”, which divides the townsfolk, some of whom believe him to be a saviour, in the true Biblical sense, while others see him as no more than a fake faith healer.

While I’m only early into the book, at this stage, I’m not enjoying it as much as To the Islands and Visitants. The characters seem a little two dimensional and dated, and the God-bothering plot is not to my reading taste. That said, based on Stow’s other writing, I’m prepared to read on, in the expectation of being pleasantly surprised, again!

The Zookeeper’s Wife by Diane Ackerman

I recently watched The Zookeeper’s Wife film, and despite its lukewarm critical response (it only has a 60% approval rating on Rotten Tomatoes), I enjoyed the film. Although “enjoy” is hardly the right word to describe a film highlighting the atrocities committed by Nazis in Poland during the German occupation.

The film motivated me to research the lives of the Polish zookeeper, Jan Żabiński, and his wife, Antonina, and how they spirited Jews out of the Warsaw ghetto, sheltered them in their bombed-out zoo and helped them escape via the Polish underground resistance. It also moved me to read Diane Ackerman’s book, The Zookeeper’s Wife (Amazon), upon which the film is based and which draws on the unpublished diary of Antonina.

In these uncertain times, with the imbroglio over North Korea, Islamic extremism and Trump’s tweets, it’s discomforting to read the first few chapters and see how easily everyday life, raising a child in a cosmopolitan city, can be turned upside down. At times it must have felt to Jan and Antonina Żabiński like they had slipped into an inhumane parallel universe, where the norm was cruelty and war.

Not enough time to read

Nowadays, I find it hard to stick to reading one book. Hence, I have several on the go at any one time and often across different genres: fiction, nonfiction, science, biography, something on dogs etc. Maybe it’s a sign of a shortening attention span as I get older? Or perhaps I’ve realised every day that passes is one day less I’ve got to read all the books I want to read!

What book are you currently reading? Or like me, should the question be, what books?