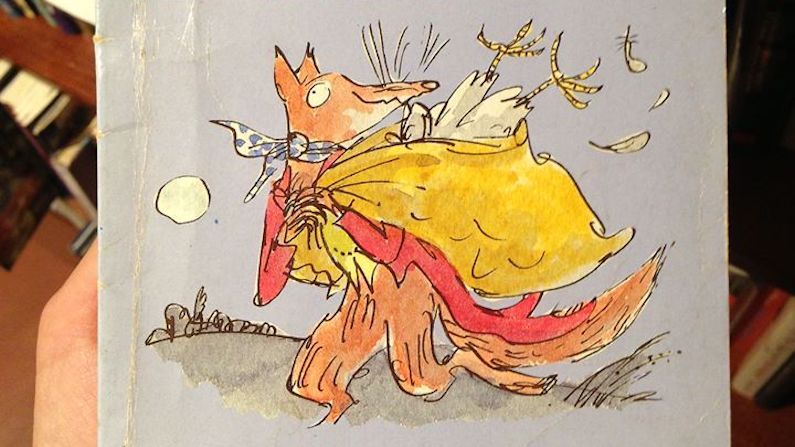 A pleasant memory from 2013 popped up in my Facebook timeline the other day. It was a comment I’d made in response to a post by the Sydney Writers’ Festival on a “fantastic find” in Sappho Books (Glebe), a treasured secondhand copy of Roald Dahl‘s Fantastic Mr Fox.

In 2013 I recalled the joy of reading Fantastic Mr Fox three years earlier to my then ten-year-old son. Those were the golden days of parenting, when his bedtime ritual involved mum and dad taking turns to sit beside his bed and read aloud with him, putting on silly voices and acting out characters within the stories.

Meant to be Read Aloud

Mr Fox flattened his body against the ground and lay very still, his ears pricked. He waited a long time, but he heard nothing more.

‘It must have been a field-mouse,’ he told himself, ‘or some other small animal.’

He crept a little further out of the hole … then further still. He was almost right out in the open now. He took a last careful look around. The wood was murky and very still. Somewhere in the sky the moon was shining.

I chose these sentences at random from Chapter Three, The Shooting. But they illustrate my point: every word is needed, you can’t just skim-read the passage and get the same effect. And every word read aloud “feels good” in the mouth!

Roald Dahl was a creative and brilliant writer. Given he wrote many of his works for children, perhaps he did intend for them to be read aloud, by a parent or carer at bedtime, as I did for my son. We read several other of Dahl’s books, but none ever struck me as quite so poetically flowing and pleasing to the ear as Fantastic Mr Fox.

So have a hunt in a secondhand bookshop, buy yourself a new copy or download a Kindle version (Amazon affiliate link). And then find a quiet place to read aloud.

Or, better still, read it to your child at bedtime. I think like me, you’ll find reading Roald Dahl’s Fantastic Mr Fox aloud is fantastic!